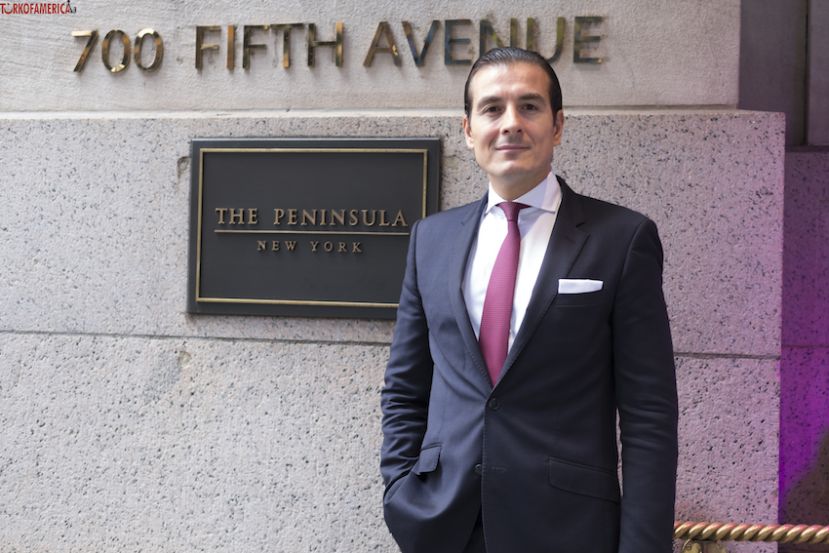 The Peninsula Hotel, where Turkey’s President Recep Tayyip Erdoğan and his delegation have stayed during their visits to New York since 2012, is one of the most prestigious five star hotels of the city. And, the hotel’s manager, Alpan Keskin, was one of the Turkish professionals with a senior position in New York’s hospitality sector. Lately, he was appointed as Hotel Manager at The Peninsula Beijing.

Holding the top second position at the hotel, Keskin had started his job there in 2008 as the Director of Food and Beverages. Then, he was promoted as the Executive Assistant Manager. And, in 2012, he was assigned to the position of the Resident Manager.

The Hong Kong and Shanghai Hotels, which are under the Limited’s group, is among the reputed Asian hotels in the US. Having been opened in 1928, the Peninsula Hotels are now serving in the sector in 10 different countries, including China, Japan, the US, and the Philippines.

A new branch of its will be opened in İstanbul’s Galata Port in 2019. Keskin has played a role in introducing of the owner of the Peninsula Hotel with the investors in Turkey. And, he is pleased that he will also be helping his friends during the opening stage of the branch in İstanbul.

Keskin graduated, in 1992, from the applied tourism program of Turkey’s Marmara University which was organized in partnership with the Swissotel of the Bosporus. After having completed his studies in this program, which he defines as the place where he ‘learnt all the details regarding hospitality industry’, Keskin began his first job in Kazakhstan’s first five star hotel, the Ankara Hotel, during its opening phase. He had helped with the formation of the team in that hotel.

In 1999, he received a reply for his application to a position at Swissotel in New York and he was called for an interview. Keskin started his journey to New York without knowing anyone in the city at that time. And, he was accepted to the job after the interview.

“I had arrived in New York on a Monday; and, on Tuesday, I started to work”, Keskin says. Responding to the question on ‘whether it had scared him or not to have started working that quickly in a country that he did not know at all’, he says: “Rather than a fear, I felt a desire to do things better”.

“The customer group of Mandarin was a completely different mass. It helped me a lot in understanding the expectations of customers”, Keskin says. His experience in Mandarin also helped him in getting closely familiar with the Asian culture within the hospitality sector, since the Mandarin Oriental and The Peninsula are among the most important representatives of hotels culture of the east in New York.

“As the delegations from Turkey began staying at the hotel, we also made certain adjustments in the menu of the hotel. We’ve added the Turkish breakfast to the menu”, Keskin says.

The 235 room hotel has around 400 staff members. Owned by Sir Michael Kadoorie, a Hong-Kong born child of a family originally from Baghdad, The Peninsula Hotel is a member of the CLP Holdings Ltd. firms.

Known for the details established in his hotel and for his close relations with the workers, Kadoorie is one of the most important idols of Keskin.

More in this category: « A Turkish-American at the Camp of Democratic Party Senators’ Elections Committee Green Card Holders Should Consider Getting the Citizenship As Soon As They Qualify »