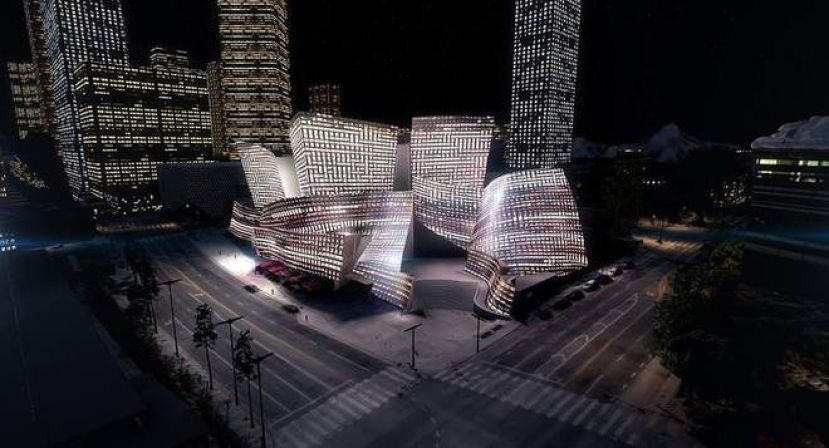 Anadol, a bubbly and rather cherubic-looking 32-year-old who dresses entirely in black, likes to imagine the building – designed by Frank Gehry – as an enormous artificial intelligence, one that recalls the orchestra’s past and slips into reverie about its future. Armed with animations and storyboards, he showed up at the philharmonic’s administrative offices – an elegant but understated building next to the concert hall – to detail his progress.

Gathered in a small conference room are Kenric McDowell, an artificial-intelligence expert from Google, and several philharmonic officials, chief among them Chad Smith, the orchestra’s chief operating officer and de facto head of programming, a man whose preppy demeanour belies a reputation as one of the most innovative figures in classical music.

The building’s “performance”, staged for patrons paying upward of $2,500 (£1,900) per person for the opening-night gala, and free on the nine evenings after that, falls into three parts. First, “Centennial Memories”, when data from the philharmonic’s history – 44.5 terabytes of it, Anadol says – is projected onto the building’s skin. Smith breaks in: “Forty-four-point-five? The last time we were together, it was 7 terabytes.”

That was a while ago, Anadol reminds him. The audio recordings alone – nearly 77,000 of them – now came to 7 terabytes.


“That’s an average of two recordings a day,” Smith observes, doing a quick calculation based on the 99 years the orchestra has been playing – the actual centennial won’t come until September 2019. “Interesting. OK.”

Next would come “Consciousness”, when the building would process the billions of data points to form a vast web of connections: every performance of every symphony, every trumpet, every oboe, every note the orchestra had ever played. And finally, “Dream”, when the concert hall would fuse it all together to generate a combinatorial fantasia – to “hallucinate”, as Anadol puts it.

“This,” he declares, “will be a very divine moment.”

And one long in coming. It took 16 years for the concert hall to be built after Lillian Disney – Walt’s widow – donated $50m for its construction, and it has taken another 15 years since its completion in 2003 to realise the architect’s vision for its exterior.

“I have always had the dream that images and videos would be projected onto the Walt Disney Concert Hall,” Gehry says in an email. “During the design process, I selected the metal for the express purpose of taking projection. I’m happy that the L.A. Phil is going to do it now for its anniversary.”

The memories that inform WDCH Dreams are usually locked away in a 2,500 sq ft corner of the Los Angeles County Hall of Records, a nearby 1960s highrise. But even as the show mines the orchestra’s past, WDCH Dreams speaks to current issues in computing. It uses some of the same artificial-intelligence algorithms that underlie facial recognition, which has become increasingly controversial as its potential for abuse becomes clearer. And Anadol’s idea that  a building can think and dream is a fanciful version of the internet of things, the fast-growing network of “smart” objects – home appliances, thermostats, cars what have you – that are being given a sliver of intelligence, with little thought for how to secure them against digital intruders.

The project also loops back to popular culture, in particular to the films of Christopher Nolan who, in movies such as Memento and Inception displays a narrative sleight of hand that transforms everyday experiences like dreaming and remembering into the stuff of wonder and suspense. A key methodology behind WDCH Dreams, a machine-learning technique that originated in a Google lab in Switzerland, has been labelled “inceptionism,” after the 2010 movie that starred Leonardo DiCaprio as a corporate spy who set out to manipulate his target’s dreams.
[opera-house-6.jpg]

Anadol first connected with the Google AI team at a 2016 symposium at a San Francisco art gallery. Later that year he was offered a residency at Google’s Artists and Machine Intelligence programme, a nascent effort to bring artists and engineers together to ponder big questions, such as the nature of intelligence and the relationship between humans and machines.

With Google supplying machine-learning experts and cloud-computing, Anadol and his team set to work to make their computer system dream. They used different types of neural networks – the computing technology that underlies most AI efforts – to process pictures and text from the orchestra’s archives and generate new imagery based on them, as well as to fashion a sound collage from decades of recordings. It’s about “the idea of the machine as collaborator”, Anadol says.