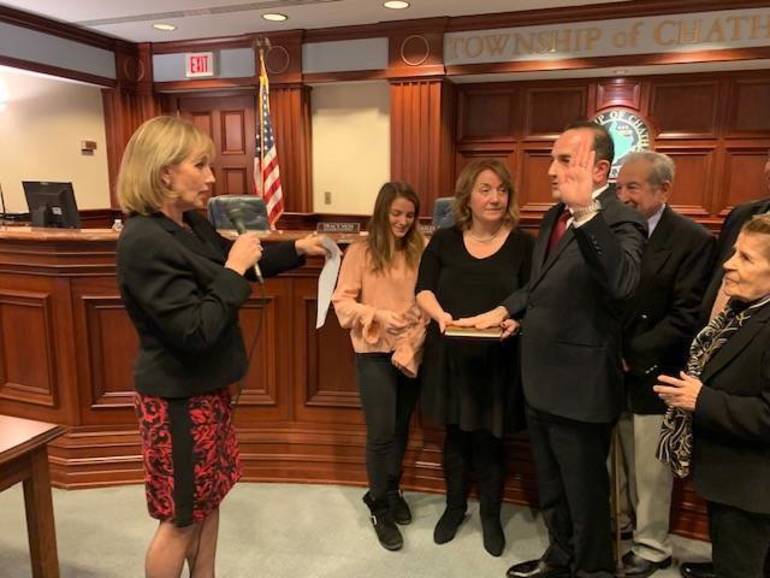 By ED BARMAKIAN, CHATHAM, NJ - "My name is Tayfun Selen. I'm the mayor of Chatham Township." Those words brought applause from the packed crowd in the Chatham Township Municipal Building meeting room on Thursday night when Selen achieved what he described as the "American Dream" after he was voted in as the new mayor of Chatham Township and sworn in with the help of former Lt. Governor Kim Guadagno. An immigrant from Turkey, Selen came to the United States 22 years ago, starting out as a gas station attendant with little mastery of the English language. It was noted that he is not the first Turkish immigrant to serve Chatham Township since Turkey native Rustem Bey served as the township's very first police chief.

Selen told the story about his first name, which he tells people he meets that it's pronounced like a typhoon. The reorganization meeting brought sweeping, typhoon-like change to the township committee for 2019 as the behind-the-scenes maneuvering was revealed. The triumvirate of Selen, committee member Mike Kelly and newly sworn in committee member Tracy Ness pooled their votes to elect Selen as mayor and Kelly as deputy mayor.

Outgoing Chatham Township Mayor Curt Ritter opened by nominating Kelly for mayor (see video below), which was seconded by outgoing Deputy Mayor Karen Swartz. But Kelly declined the nomination and promptly brought out his prepared remarks, nominating Selen for mayor. Kelly cited "diversity" as one of the factors in nominating Selen, who is now an American citizen, in the video below. Selen added the votes of Kelly and Ness to his own to win the 3-2 vote, which was opposed by Ritter and Swartz. Tayfun Selen speaks about his background after being elected the new mayor of Chatham Township (source: https://www.tapinto.net)