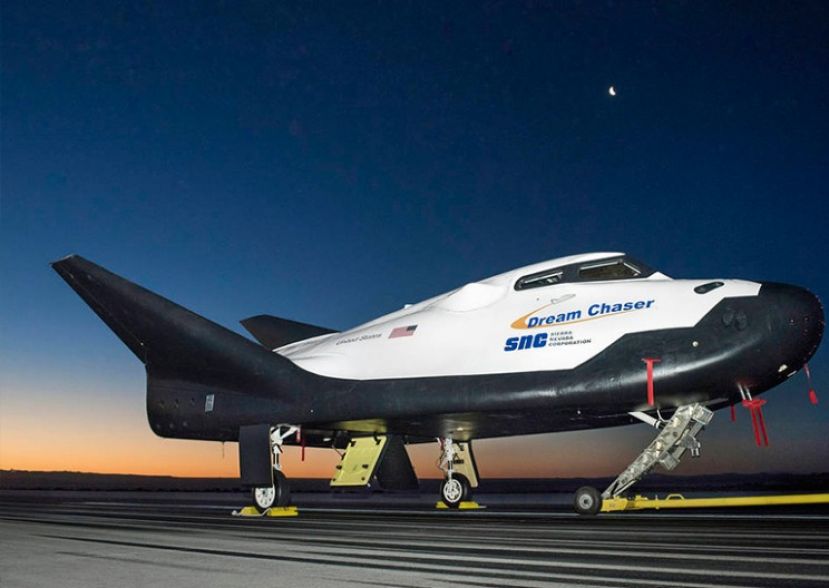 The Dream Chaser is a very cool looking vehicle, artist mock-ups, make it look like half way between an inflatable toy and the Concord. The machine is built by the Sierra Nevada Corporation which is one of the three companies that won the rights to ferry cargo between earth and the ISS from 2019 to 2024. The design of the new ship means it can dock onto the ISS and provide fast access to passengers or cargo. The ship has two models: one manned version can take up to seven crew members; an unmanned version will be able to carry up to 5,500 kilograms (roughly 12,000 lbs) of payload. This amount exceeds the necessary requirements stipulated by NASA in the original agreement documents.

The ship itself is relatively small, only 9 meters long and roughly one-quarter of the size of the models it will replace. NASA states that the craft needs to 'Fly frequently, travel safely, land on (most) runways, and operate economically'. The next lot of testing on the Dream Chaser will confirm its aerodynamic properties while tweaking its flight software and control system performance. The test will be conducted at the NASA's Armstrong Research Centre. To fulfill its contractual obligation SNC will start delivering cargo in 2019 and will fly at least six delivery and recovery missions until the contract ends in 2024. SpaceX and Orbital ATK are the other two companies who have contracts with NASA to serve the ISS.

The Dream Chaser is able to land back on Earth, bringing with it experiments, crew and other items from the ISS. SpaceX crafts also have this capability. Previous cargo ships were filled with trash from the station and burned up on re-entry into Earth.
ISS on Google Earth

If you're curious what receiving a load of cargo into the ISS looks like then just head over to Google Street View, which has mapped the interior of the ISS. As a bonus for the unusual project, the images were captured while one of SpaceX's Dragon vehicles was in the dock, so you can get an insight into just how they get all that stuff up there. The ISS has been operating as a research base in space for more than 16 years. The spacecraft is made up of 15 connected modules and floats 400 kilometers above Earth. Regular restocking is required to maintain the station's experiments and to feed the six astronauts who work in shifts ranging from short three month deployments to up to a year.