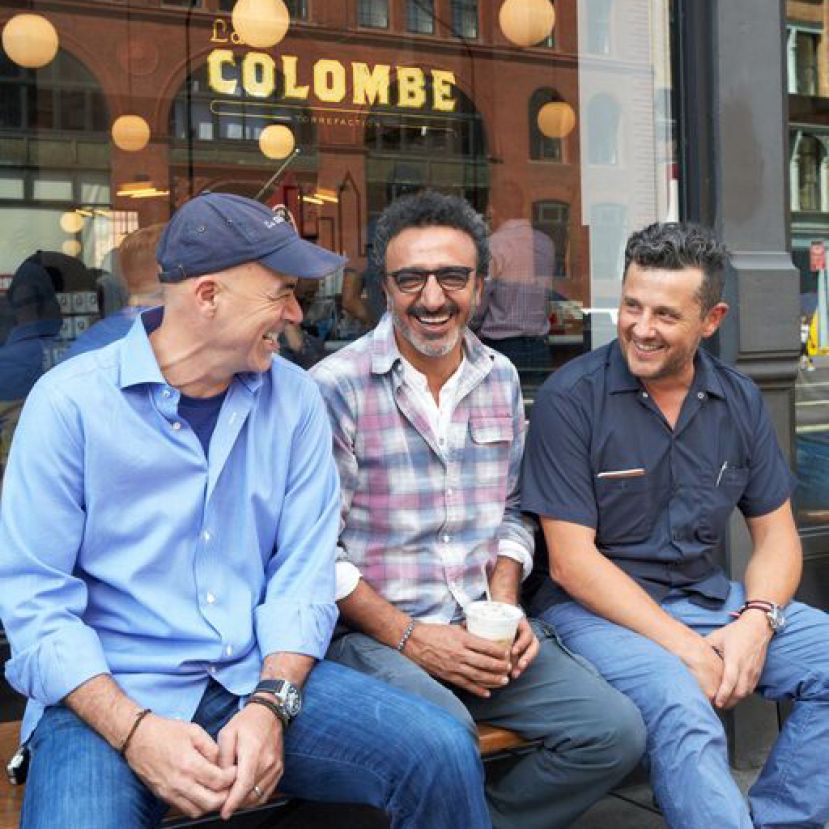 Arriving in Philadelphia with few possessions and little money, Todd Carmichael started walking the city with business partner JP Iberti to scope out storefronts. In short order, they took on a 50-year lease in a bustling downtown neighborhood, renovated the space themselves and, in May 1994, opened the first La Colombe café. La Colombe Coffee Roasters, with 750 employees, now runs 26 cafés in five cities, distributes its coffee to some 3,500 restaurants, hotels, cafés and retailers and operates an online store. The company says revenue is approaching $100 million. Following a 2015 capital infusion from Chobani LLC Chairman and CEO Hamdi Ulukaya, the company early this year introduced its canned, chilled Draft Latte line nationally, quickly becoming a force in the U.S. ready-to-drink coffee category.

Within months of the national rollout, La Colombe announced that the Draft Latte brand had reached 25,000 distribution points nationally, including big-box retailers, becoming the country’s fastest-growing ready-to-drink coffee beverage, based on industry data. More than a third of U.S. grocery stores carried the product by August, according to La Colombe, which had produced 6 million cans.

Carmichael, 54, La Colombe’s adventure-seeking, socially conscious CEO, believes the product’s ability to saturate roughly 37 percent of the grocery market in seven months represents a vacuum in a coffee industry that’s primed for “the next big thing” – a mobile experience akin to that of the banking industry. He aims for La Colombe – the company’s official name is La Colombe Torrefaction Inc. – to lead the transformation.

“My intent is to change the coffee industry in America,” Carmichael said in a recent interview in his office at the company’s newer, industrial-chic flagship café in Philadelphia, where La Colombe also serves its coffee-infused rum. “You need to evolve at the same pace if not faster than the world.”

La Colombe’s ready-to-drink Draft Latte is set to surpass the company’s neck-and-neck hospitality and café revenues this quarter. “It will take eight months to do what we did in 23 years in the other two categories,” said Carmichael, whose company roasts 8 million to 10 million pounds of coffee a year. “The RTD thing is a monster,” he said. Ready-to-drink coffee is a $3 billion market, “and it’s growing fast.”

Coffee has been rooted in bricks and mortar, represented by Starbucks’ café-on-every-corner approach, “and that was amazing and it transformed the way Americans interacted with coffee,” said Carmichael, who worked at one of the first three Starbucks.

He sees a change in customer behavior. Most people waiting in café lines are getting coffee to go, with a majority buying cold coffee drinks, he said.

Just as the cola industry evolved from soda jockeys, Carmichael said, “the coffee experience is waiting for that revolution to happen, and it’s happening now in a very dynamic way.”

While La Colombe now opens three or four of its hip-vibe cafés a year and recently expanded to the West Coast, Carmichael sees industry transformation in mobile artisanal coffee. “Rather than have a café on every corner,” he said, “I want you to have a crafted drink anywhere.”

That scenario may eventually involve self-heating cans, or café-quality hot lattes made at home with recyclable aluminum single-serve pods like one Carmichael showed in his office. “I want to change the way you brew coffee at home,” he said. “Everything you see on a café menu you have to be able to do mobile.”

Draft Latte, with a patent-pending process that uses nitrous oxide vapor to achieve a foamy handmade texture, is fashioned after the version that La Colombe pours from its café taps. A plastic lip guard on the can helps customers experience “full frothness” and directs the milky drink “to the perfect part of your tongue,” said VP of Marketing Kathryn O’Connor. The company adds no sugar to the original Draft Latte, which has steamed-milk sweetness, and no more than a sugar cube’s worth to any sweetened flavors, she said.

Chilled Latte for Everyone

The recipe appears to be popular. Draft Latte sales are growing by 3,800 percent, versus 36 percent for hospitality, 27 percent for café and 30 percent for ecommerce. And while La Colombe’s website notes that Carmichael “converted the nation’s culinary elite into La Colombe drinkers,” he aims to make high-quality coffee for everyone.

Toward that end, the company recently started sponsoring teen NASCAR driver Gray Gaulding and giving away chilled Draft Latte cans to race crowds. It also handed out cans at Burning Man and has partnered with Tough Mudder, Wanderlust Yoga Festival, the Roots Picnic and the Sundance Film Festival, among other events. “If you’re going to make coffee for Americans, you have to go where Americans are,” Carmichael said.

After producing a pilot line in Philadelphia with limited distribution, La Colombe “met with every single retailer of size in America” and took the canned drink to trade expos, gaining customers by serving the product, Carmichael said. “You’ve got to blow a lot of people’s minds that are used to drinking the new things.”

Draft Latte rolled out nationally from the company’s newly acquired,120-employee Muskegon, Mich., plant, in dairy country. Rather than taking the typical convenience-store route, Carmichael said, the company launched through grocery, natural food and big-box stores, aiming to place the milky beverage in the high-traffic dairy case.

Lacking its own direct store delivery trucks, La Colombe couldn’t have entered the ready-to-drink business 15 years ago, but distribution is more democratic now thanks to third-party logistics contractors, he said. Production strictly in-house, allowing Carmichael to focus on every detail from farmer to factory. “I need to know you, I need to know everything is good, and I need to make it,” he said.

Chobani founder Ulukaya, whom Carmichael called “my investor match” and friend, left operations to the La Colombe CEO and co-founder Iberti, company president, upon becoming majority owner and sole outside investor. Ulukaya at the time said he shared the pair’s “mission to increase the craft and quality of coffee in America while elevating the cafe experience to something truly special.”

While La Colombe and Ulukaya didn’t disclose finances, The New York Times reported in 2015 that he bought out a private equity firm that had invested $28.5 million in the company the previous year.

“I think every big dreamer needs an investor,” Carmichael said. “Hamdi has given me a gift, and that’s freedom. … He understands that a driven and talented entrepreneur is best left to do and accomplish the dreams that he set up for himself. It’s a totally different relationship than having an institutional investor.”

Carmichael also said Ulukaya shares his vision of making life better for others.

The CEO’s dreams are in keeping with a man who seems to be on a mission, or several. In his mid-40s, Carmichael set a world speed record for crossing Antarctica from coast to South Pole solo, on foot and skis. More recently, he and his wife adopted their four children from Ethiopia.

La Colombe has built a “powerful story” around Carmichael’s “larger-than-life adventures and passionate crusades for ecological and social causes,” said Ram Mudambi, strategy professor at Temple University’s Fox School of Business, who called the company a “cool and upmarket brand.”

While Mudambi doesn’t consider La Colombe’s two-decade growth that unusual, that story, he said, “is a key asset that may well be under-leveraged at the moment – something that may well have piqued Ulukaya’s interest.”

La Colombe’s early moves with canned Draft Latte, an “architectural innovation” that combines known industry components – nitro coffees and draft lattes on tap – have been impressive, he said, but “these are trying times for specialty coffee companies” that are racing each other to build sales and develop new channels as the industry matures. “La Colombe’s very success is likely to bring new competition,” he said.

“The key decision for a firm like La Colombe is to decide what they want to be,” Mudambi said. “To some extent this is about whether they stay true to their roots and to their story or whether they wish to go for scale and the mass market.”

“So much is changing in the coffee category right now,” Carmichael said. “And, we’re just excited to see how it all plays out.” - (Source: Dinah Wisenberg Brin / https://www.forbes.com)

More in this category: « Boeing Earns US $11B Contract From Recovering Turkish Airlines Sierra Nevada Corporation CEO Calls for Advancement of U.S. Leadership in Space Economy »