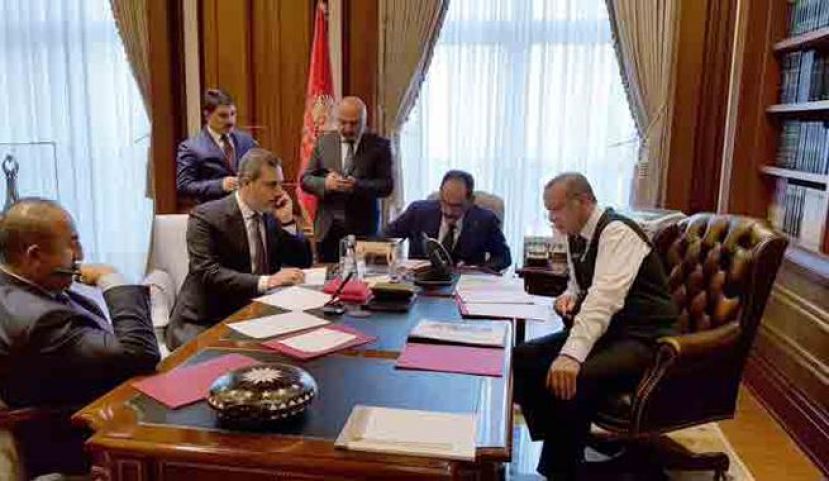 Çavuşoğlu said Trump had given his assurance after President Erdoğan repeated Ankara’s concerns over the continued delivery of heavy weapons and armored vehicles to the YPG, a group Ankara considers a terror organization because of its links with the outlawed Kurdistan Workers’ Party (PKK).

During the conversation, Erdoğan once again urged for the need to completely resolve the visa crisis between the two allies, according to Çavuşoğlu.

“We stressed that there should not be such unnecessary issues between the two countries,” he said.

Erdoğan said the phone conversation with Trump was very productive, as he shared a picture of himself on the phone with the U.S. president. Çavuşoğlu, National Intelligence Organization (MİT) Chief Hakan Fidan and presidential spokesman İbrahim Kalın are also seen in the picture.

Turkey has been slamming the U.S. for providing around 4,000 truckloads of weapons to the YPG in the fight against the Islamic State of Iraq and the Levant (ISIL). Erdoğan questioned why the U.S. has continued to supply them with weapons if the war against ISIL was about to be won.

The two presidents have exchanged views on the recent Sochi Summit with the participation of the presidents of Russia, Iran and Turkey, Çavuşoğlu said, adding Ankara’s opposition to the YPG’s participation in a peace conference has also been supported by Iran.

Before the conversation, Trump said he would contact the Turkish president.

“Will be speaking to President Recep Tayyip Erdoğan of Turkey … about bringing peace to the mess that I inherited in the Middle East,” the U.S. president tweeted.

“I will get it all done, but what a mistake, in lives and dollars (6 trillion), to be there in the first place!” he wrote.

“It is obvious that the reform process will not be simple, it will require compromise and concessions from all parties, including, obviously, the Syrian government,” said Russian President Vladimir Putin after the Sochi summit.

The national dialogue congress will serve for two goals: To draw up a new constitution and to run a “fair and transparent election” under the monitoring of the United Nations, Erdoğan told journalists after the summit.

He said there was “no such situation at the moment,” in regards to whether Turkey had initiated any contact with Bashar al-Assad or mediators.

Syria’s main opposition stuck by its demand on Nov. 23 that al-Assad does not play a role in an interim period under any U.N.-sponsored peace deal.

A gathering in Saudi Arabia of more than 140 participants from a broad spectrum of Syria’s mainstream opposition also blasted Iran’s military presence in Syria and called on Shia militias backed by Tehran to leave the country.

“The participants stressed that this [the transition] cannot happen without the departure of Bashar al-Assad and his clique at the start of the interim period,” opposition groups said in a communique at the end of the meeting.

The opposition groups met to seek a unified position ahead of U.N.-backed peace talks after two years of Russian military intervention that has helped Assad’s government recapture all of Syria’s main cities.

“The Syrian opposition has sent a message that it is ready to enter serious direct talks over a political transition in Syria and has a unified position and a vision for the future of Syria,” Ahmad Ramadan, opposition spokesman, told Reuters.

The participants elected 50 members to a High Negotiations Committee and were about to finalize the delegation for the next round of U.N.-sponsored talks, scheduled to be made “in days.”

There had been speculation that the opposition at the meeting could soften its demands that the Kremlin’s ally al-Assad leave power before any transition.