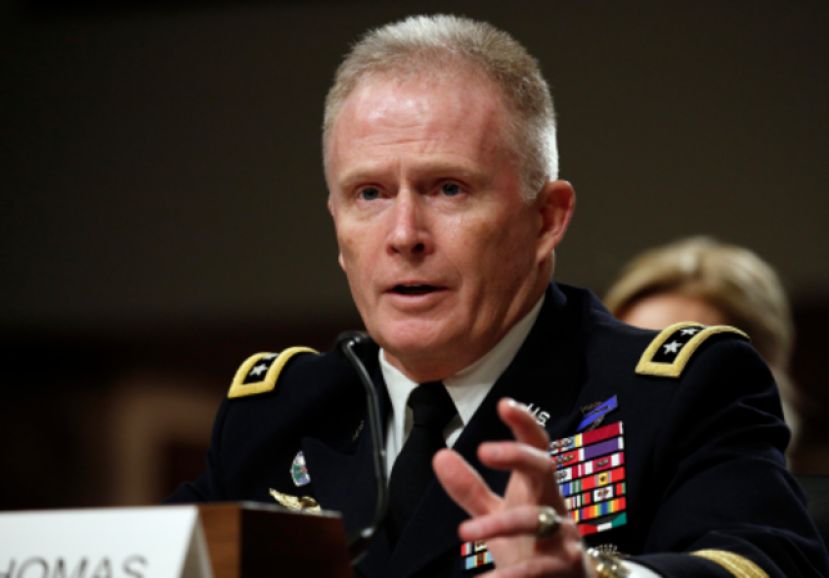 "I've dealt with them directly; I was on the formative stage of the relationship with these guys. They formally called themselves the YPG, who the Turks would say equated to the PKK," he said. "So we literally played back to them that you've got to change your brand. What do you want to call yourself besides the YPG? With about a day's notice they declared that they were the Syrian Democratic Forces." President Recep Tayyip Erdoğan responded yesterday by saying that friends should not deceive each other and added: "We know very well who's who. Both are the same," during a press conference at Istanbul's Atatürk Airport before starting a two-day Gulf tour in Saudi Arabia. "What really matters isn't changing the name plate, but what is inside," he added.

Meanwhile, General Raymond Thomas (Middle) thanked U.S. Special Presidential Envoy Brett McGurk for his contribution throughout the process and said with the rebranding, the YPG gained a little bit of credibility. He said: "They wanted a seat at the table, whether it's Geneva or Astana, wherever the talks are happening about the future of Syria, and because they had been branded as the PKK they could never get to the table. So while we paired with them militarily, McGurk was able to keep them in the conversation and allowed them the necessary legitimacy to be good partners for us."

Gen. Thomas said they started to work with the YPG by accident when they saw the YPG's fight against Daesh in Kobani where the former lost 2,000 militants in 2014.

The American general also claimed that he and McGurk warned the YPG not to hold onto Öcalan because they wouldn't have any chance of legitimacy in the construct that they were in. "They are governing in their wake; they are providing representative governance. It is not perfect; it tends towards socialism. ... Luckily, they are at the table now and have the opportunity to represent themselves," he added.

In contrast to what the American general says, Turkey has blocked the YPG's participation in U.S.-led coalition meetings, as well as negotiations in Geneva and Astana.

American officials still debate the composition of post-Daesh Syria. Many officials oppose a long-term U.S. presence in the country, but some claim the YPG could be a conduit for U.S. interests with the backing of U.S. military bases.

Washington has long militarily supported the Syrian Democratic Forces (SDF) in Syria, which is predominantly led by the PKK's Syria affiliate, the PYD, and its armed wing, the YPG, against Daesh. U.S. support to the YPG has been criticized by Turkey, claiming that the support given to the YPG is ultimately transferred to the PKK and used against Turkish citizens. In addition, Ankara argues that there are no good or bad terror organizations and that Turkey's ally countries should not pick-and-choose between them.

The PKK, which is listed as a terror organization by the U.S., the EU, and Turkey, has been carrying out an armed conflict against Turkey for over three decades, causing the loss of over 30,000. In recent months, the PKK has increased its attacks against civilians in southeastern and eastern provinces of Turkey.

More in this category: « President Trump Likely to Appoint Daniel B. Smith As Next US Envoy to Turkey Murat Guzel: Tillerson's Visit to Istanbul Strengthens U.S.-Turkey Relations »