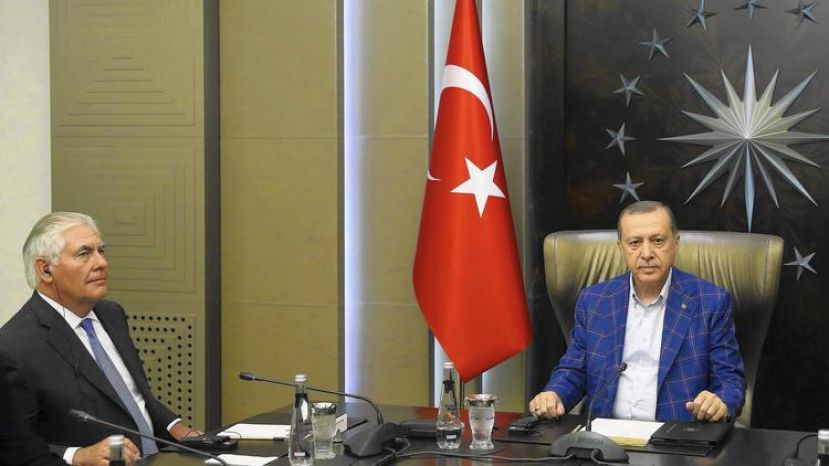 The most significant thing about President Trump's "America First" mantra is an emphasis on the need for American foreign policy to prioritize and engender economic growth at home.

One country that has had a highly successful mutually beneficial economic partnership with the U.S. is Turkey. And yet the truth remains unchanged: Losing Turkey as an economic partner in today's world would mean a big loss for America and Pennsylvania in particular.

Turkey is America's fourth largest trading partner and one of its most important strategic counterparts in the world. As the Turkish economy has grown, the United States has directly benefited.

As of 2015, according to SelectUSA, over $1.2 billion of Turkish investment has come to small towns and large cities across the United States. Majority Turkish-owned firms employ nearly 5,000 Americans. American companies have been able to export upward of $3.6 billion of products just in 2015 to Turkish consumers, according to the Commerce Department. Over $463 million of Pennsylvania products were exported to Turkey in 2016. This was a 27.9 percent increase from 2015.

The Obama administration raised the U.S.-Turkey relationship from an economic partnership to a fully strategic one in 2009. That led to the creation of the Framework for Strategic Economic & Commercial Cooperation. The move has paid off very well: $17 billion worth of trade was conducted between our two countries in 2015 alone. Turkey is experiencing growth in every major sector, from energy to pharmaceuticals to tech and innovation. This is encouraging hundreds of iconic American brands, such as Ford or GE, to invest in and to export to Turkey.

Still, Turkey's economic impact goes far beyond its strong relationship with the U.S. Its international contributions — be it economic or strategic — stretch from its participation in the World Trade Organization to its membership in the Organization for Security and Cooperation in Europe as well as the European Union's Common Market. Its strategic importance alone is thus vital to, above all, both the U.S. and the EU, two of the Western world's most important entities.

Turkey's own economic progress has also been impressive as growth in its gross domestic product accelerated to 5 percent at the beginning of this year, a staggering rate considering last year's string of horrific terrorist attacks, the failed coup attempt and an influx of 3.2 million refugees. Despite all that instability, Turkey maintains its role as a strategically vital international economic corridor between West and East.

During Tillerson's visit to Turkey, many Turkish families were reflecting on tragedies of the last year. As a proud son of Turkey and even prouder American citizen who has built an international organics food business, I view this first-year anniversary through a hopeful lens. For the Trump administration, re-establishing strong and stable government-to-government relations will only further facilitate numerous private sector success stories. A strong Turkish economy will not only make for a stable region and allow for Turkey to care for refugees but also, as history has shown, directly benefit America.

When returning from trips abroad as my flight taxis to the gate, I often consider the wisdom of our Founding Fathers. Indeed, they are what truly make America great. George Washington wrote in his Farewell Address in 1796 that "our Commercial policy should hold an equal and impartial hand ... establishing [relations] with Powers so disposed; in order to give trade a stable course."

We need a stable course with not only our government relations but also our commercial relations with Turkey. Instability in Turkey leading to an economic dip would have consequences for everyday people, those poor refugees and American companies and their employees.

Tillerson's visit is a chance for our two nations to recommit. He must further cement this strategic relationship through the hopeful lens of mutually beneficial commercial policy.

Murat Guzel is founder and CEO of Natural Food Group, an organic food business based in Whitehall Township.
Source: http://www.mcall.com

More in this category: « Friends Do Not Deceive Each Other, Erdoğan Tells US General Who Advised YPG's Name Change American Military Officials Question Syrian Kurdish Links to Turkish PKK »