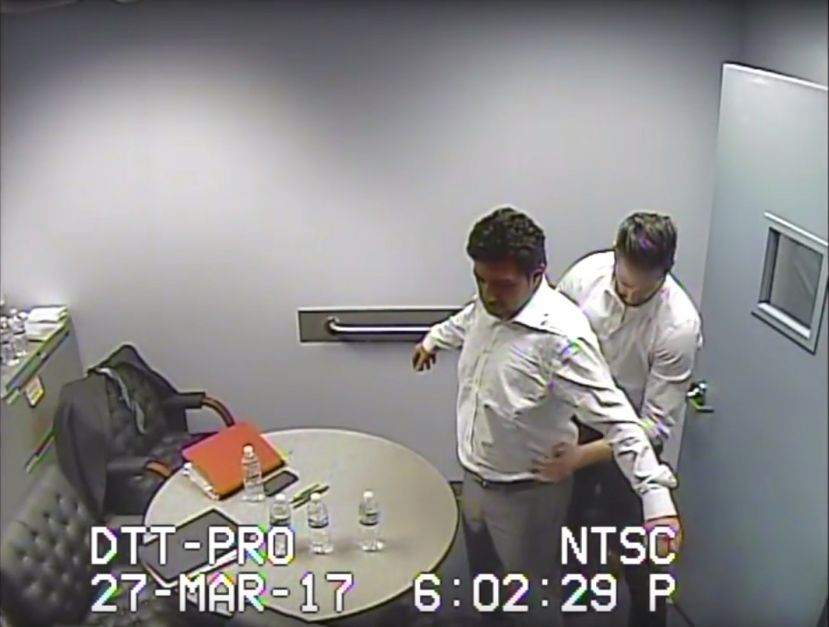 Taken from federal surveillance footage, this still image shows U.S. authorities frisking Mehmet Hakan Atilla after his arrest on March 27, 2017. A former manager at the Turkish state-run bank Halkbank, Atilla is being tried in New York over transactions that flouted sanctions against Iran.

Lockard’s colleague Sidhardha Kamaraju went a step farther this afternoon, citing Atilla as proof that the United States can bring even the most powerful to justice.

The reference had been immediately apparent to the case’s U.S. observers: Critics of former U.S. Attorney General Eric Holder repeatedly skewered his Department of Justice for failing to prosecute the major banks behind the serial sale of toxic subprime mortgages.

Karamaju meanwhile portrayed Atilla as a humble public servant, earning a government salary of about $100,000.

But video of Atilla’s arrest showed a more brazen side of the banker. “Do your best,”  he told FBI agents, warning that his arrest would bring geopolitical backlash in Turkey.

Atilla’s attorney, Victor Rocco, meanwhile likened the prosecution’s accusations to something out of the “Twilight Zone” — not fitting for an “American courtroom,” said Rocco, an attorney with Herrick Feinstein.

“Hakan Atilla is a blameless pawn,” Rocco said, adding that the man playing that chess piece was gold trader Reza Zarrab.
Reza Zarrab, a 34-year-old gold trader who was charged in the U.S. for evading sanctions on Iran, is pictured in this Dec. 17, 2013, photo surrounded by the media at a courthouse in Istanbul. The case against Zarrab is built on work initially performed by Turkish investigators who targeted him in 2013 in a sweeping corruption scandal that led high up to Turkish government Turkey’s official news agency reported that prosecutors there launched an investigation on Nov. 18, 2017, into two U.S. prosecutors involved in trying the Turkish-Iranian businessman. (Depo Photos via AP)

“That same master criminal who joined Iran’s economic jihad against the United States is now embraced by our government, as he tries to earn his way out of jail, earn his freedom by bartering the fate of another human being,” Rocco said. “And that human being is Hakan Atilla.”

Zarrab admitted on the witness stand to writing a letter to former Iranian President Mahmoud Ahmadinejad pledging his “economic jihad,” a phrase that Rocco repeatedly milked to undermine his client’s accuser.

Married to a Turkish pop star, Zarrab has become hunted by Turkish prosecutors since offering testimony here about corruption at the highest levels of Erdogan’s ruling AK Party. These include alleged payments of 45 million to 50 million euros to ex-economy minister Zafer Caglayan, and hundreds of thousands of dollars to former Turkish interior minister Muammer Guler.

“This has been in my mind, and obviously it’s your minds, your collective minds that make all the difference in the world, the Reza Zarrab show,” Rocco said.

Shortly before closing arguments, U.S. District Judge Richard Berman unceremoniously rejected a bid by Atilla’s attorneys to enter jailhouse recordings that allegedly show Zarrab claiming that one has to lie to get out of a U.S. prison. Berman’s reasoning has not yet been made public.

Rocco was not able to tell the jury about this alleged tape, but he did mention the monumental importance of Zarrab’s testimony.

“For the past three weeks, witnesses have been paraded before you, you’ve been inundated with documents, physical evidence, recorded conversations, transcripts, most of which involve the government’s principal witness in this case, Reza Zarrab, and his vast criminal enterprise,” he added.

Rocco heaped scorn as well on those he depicted as supporting characters.

One such witness, former Istanbul police officer Huseyin Korkmaz, had been involved in an investigation of the Turkish government that came to a head with a series of arrests of Erdogan’s allies in December 2013.

Korkmaz faced exile and imprisonment over the investigation, which Erdogan labeled a “judicial coup.” Carrying an encrypted flash drive with evidence he would later hand to U.S. prosecutors, however, Korkmaz eventually spirited himself and his family across the border.

Korkmaz testified in Atilla’s trial that Erdogan and his son himself received some of the funneled money. He is living on the U.S. government’s dime to the tune of $50,000, slightly below the median income of a middle-class family here.

“Huseyin Korkmaz has fled Turkey, leaving it in political turmoil, and he’s found asylum here in the United States,” Rocco said. “He, too, is being embraced by the government for taking the law in his own hands and stealing evidence that he says he developed during his investigation.”

Several other men are indicted with Atilla, but all of the remaining defendants are at large in countries that do not have an extradition treaty with the United States.

To defend his client Atilla, Rocco did not spare those absent men, heaping particular scorn upon ex-Halkbank director Suleyman Aslan, whom the attorney depicted as Zarrab’s right-hand man.

“They were like two young lovers,” Rocco quipped, referring to Aslan and Zarrab.

Prosecutor Karamaju insisted that it was Atilla, not Aslan, who filled out the duo.

“Reza Zarrab was the system, and Hakan Atilla was the method,” he said.

Bitterly contesting that description, Rocco urged the jury to inspect the evidence carefully.

“You will return a verdict, I’m sure, of not guilty and allow this innocent man, this pawn in a cosmic game of chess, to return to his wife and his son and his home in Turkey,” he said.

The jury will head to deliberations on Wednesday morning, beginning a process being closely watched half a world away.