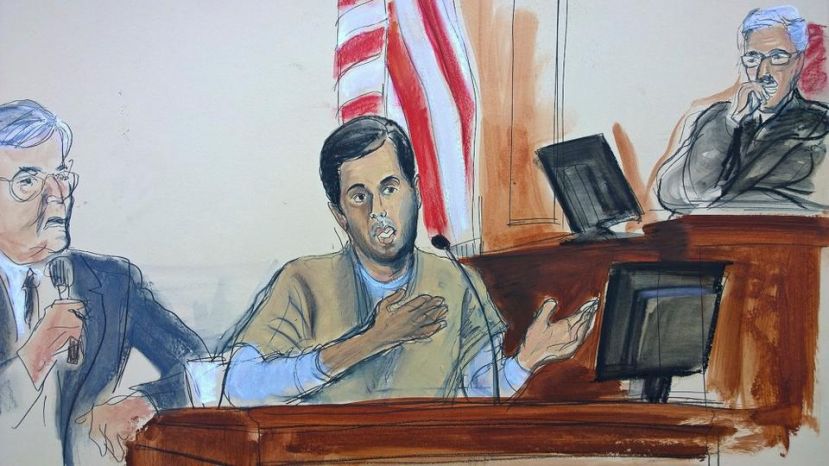 US prosecutors have charged nine people in the case with conspiring to help Iran to evade sanctions. Only Zarrab, 34, and Atilla, 47, were arrested by US authorities.

Here's what has happened so far in the trial.

Wearing prison garb on his first day on trial, Zarrab said that he was arrested by the FBI in Florida while visiting the US for a Disneyland trip, adding that he had initially lied to the FBI that he never breached US sanctions on Iran, stating that he was “scared and didn’t know what would happen.”

Zarrab, who seemed to be calm during his testimony, claimed that Atilla was the most knowledgeable person about the sanction rules” at the bank “who helped to developed the scheme.”

"He [Atilla] made sure that the system and method worked," said Zarrab, adding that Atilla had instructed him to carry it out.

He confessed that he had bribed prison guards to bring him a mobile phone and alcohol, paying around $45,000.

Stating that he started working with Halkbank in 2012, Zarrab said he bribed the then-Turkish economy minister Zafer Caglayan to broker a deal with the former CEO Suleyman Aslan who initially refused to work.

Caglayan refused all accusations, saying all actions were made within Turkish and international law.

Halkbank has also officially denied any wrongdoing, saying all of its actions are in accordance with the decisions of the UN. It added that the US has continuously tracked Halkbank’s transactions, but it had never interfered in any of them during the investigation period.

Zarrab explained how he was breaching US sanctions on Iran, by using the gold trade in exchange for Iranian natural gas, including Iranian money in the global banking system.

A white poster board was brought to the courtroom upon request by the prosecution, and Zarrab started drawing a multicolored diagram to illustrate how the system that “avoided scrutiny of US banks and regulators to breach sanctions against Iran.”

Prosecutors showed alleged documents, including emails and phone call recordings, without elaborating on their source or sources.

Zarrab mentioned a meeting in 2012, in the third day of his testimony. He said he met businessmen across the world to discuss how to include third countries including India in the business. However, he said no agreement was reached and he said he didn’t remember the name of the Indian company.

Prosecutor asked him if he stays in prison. He said he has been under FBI witness protection program since he received death threats and left the prison accordingly.

In this session of the trial, he claimed how former CEO Aslan asked him for a bribe because “he was taking too much risks.”

Zarrab introduced a new system that they had began using instead of gold trading in the exchange of Iranian money because the US had imposed new sanctions on trading goods with Iran including precious metals.

He said that they started exporting food, but this time as ghost exports, with money circulating with no products.

He again drew a chart to illustrate how they run the system. And prosecution played voice recordings of some phone calls and showed transcripts of some Whatsapp conversations, again providing no sources. We still don’t know if they were produced legally.

When asked why they used Whatsapp more often than other communication tools, Zarrab said they had believed it was secure.

Surprisingly, the prosecution played a recording of a phone conversation between Zarrab and Atilla in which it was obvious that Atilla didn’t know about the ghost trade of food that Zarrab was telling him about.

In the recording, Atilla insisted that Zarrab send documents of food exports to complete the bank transaction which Atilla thought was real.

Atilla finished the conversation by telling Zarrab that “There is no way we can do it the way you said.”

Following the conversation, court documents reveal that Zarrab went to Aslan—Atilla's superior—to complain about the situation. Aslan then phoned Atilla and ordered him to complete the process, according to the recordings.

Zarrab’s testimony became inconsistent at this point because he had previously said Atilla was the “architect” of the system.

Defence lawyers brought a suitcase full of documents to use in the case. The trial was taking longer than expected for to two reasons: Zarrab testified in Turkish and his testimony needed to be translated by interpreters, and he took his time in answering questions, according to Cuneyt Ozdemir, a Turkish journalist who is following the case at the courthouse.

Atilla’s attorney Catty Ann Fleming pushed Zarrab to admit that he doesn’t like Atilla and complained about him to Aslan.

Asked when he met with Atilla and whether he bribed him, Zarrab answered he didn't know him until late 2012, and that he never bribed him, and Atilla never asked for any money.

Through the session, Fleming asked Zarrab questions about “the lies he said so far,“ including to the US authorities.

However, Zarrab said that turning to being a witness was “the ticket to freedom.”

“In order to get out or get a reduced sentence, you need to admit to crimes you haven’t committed,” a summary of a phone conversation he reportedly held in 2016 when he was still in a jailhouse, according to Atilla’s attorney. Zarrab denied this conversation.

After a lunch break, the session continued with Zarrab saying he was carrying $102,000 when he was detained in Miami, “ which was needed for a 10-day holiday for seven people.”

Zarrab also confessed to bribing a prison guard with $45,000 in exchange for providing alcohol, a phone, and drugs, adding that he didn’t know using drugs was illegal.

The cross-examination continued into the sixth day of Zarrab's testimony.

In the previous days of the trial, the prosecution mentioned a letter that he allegedly sent to Iran’s former president Mahmoud Ahmadinejad in a bid to convince him keep the trade on.

She also asked Zarrab if he had ever been to Atilla’s office or know which floor it was on.

Answers to the questions were negative. He said he never met Ahmadinejad and also never knew where Atilla’s office was.

Such questions at the first glance seemed irrelevant, however the defence again tried to expose that "lying was something normal for Zarrab."

Cross-examination ended on the seventh day of Zarrab’s testimony—the eighth day of the trial.

On the final day, Zarrab said that he was removed from a New York federal jail after another inmate threatened to kill him for co-operating with authorities.

"He said that he had received instructions to kill me because I was co-operating," Zarrab told jurors in the Manhattan courtroom.

He did not identify the person or say when the threat was made. The US Bureau of Prisons did not immediately respond to a request for comment.

On Thursday, one of Zarrab’s former inmates filed a lawsuit against him, accusing Zarrab of rape and sexually abusing him.

He was reportedly a man at his 60s originally from the Ivory Coast.

The US vs. Atilla case will continue in the following days, and the prosecution or defence might ask him to come back again to testify.

The case has strained ties between the United States and Turkey, both members of NATO.

President Recep Tayyip Erdogan has said that the trial was an attempt to undermine Turkey and its economy.