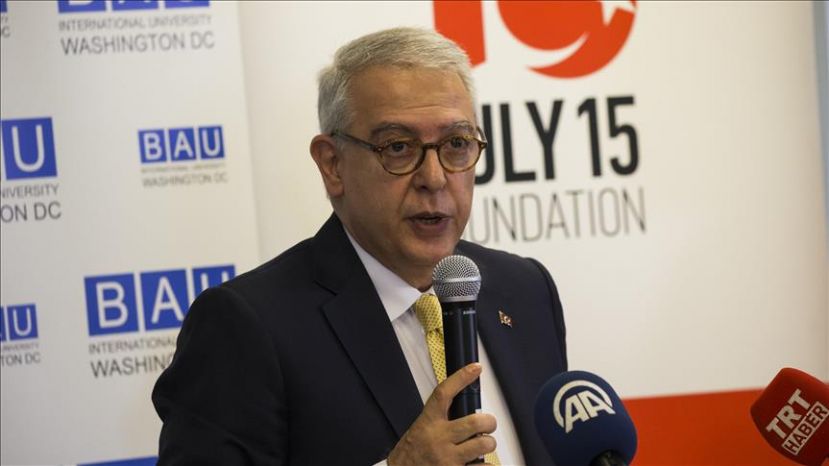 ROBERT SIEGEL, BYLINE: Ambassador Serdar Kilic uses the government's vocabulary to describe the events of last July and the subsequent arrests and dismissals of thousands of Turks from their jobs. In his telling, it was not so much a coup attempt as an act of terrorism. And what's happened since is neither a crackdown nor a purge. He calls Gulen's movement the Fethullah Gulen terrorist organization. We spoke at the Turkish Embassy in Washington.

Ambassador Kilic, welcome to the program.

SERDAR KILIC: Thank you very much. Thanks for having me.

SIEGEL: You've said that you're working with the United States. You've been asked to provide some more evidence to back up the claim to have Fethullah Gulen extradited. Will there be direct evidence of his calling the shots in last July's coup, or will it be circumstantial evidence that Gulenists were involved and he was their leader?

KILIC: So far we have provided 84 boxes of documentation and evidences.

SIEGEL: Although much of it about things that happened long before last July.

SIEGEL: But will Americans who consider the extradition request - will they ever see evidence of a statement or a text message by Fethullah Gulen that says take over - try to take over the...

KILIC: Yes. You are talking about a different type of a terrorist organization. Concealment is their basic principle. And it's very difficult to find a direct text message instructing his followers in Turkey to initiate that kind of an attack on Turkish democracy.

SIEGEL: I'd like to ask you about - you object to the word crackdown.

SIEGEL: And you object to the word purge.

SIEGEL: But many journalists who've been in other countries and witnessed what happened find those words appropriate to describe...

SIEGEL: ...What's happened - about 50,000 people charged or arrested, 140,000 people fired from their jobs. We heard from one on our program yesterday whose problem was that he'd taken a loan from a bank associated with the Gulen movement. If that's not a crackdown, if it's not a purge, what is it?

KILIC: First of all, I should underline that there are remedies in that regard. And I have stated that. Around 40,000 people have been reinstated in their previous positions after proper investigations are conduct. So I mean we are trying to stick by - to the Democratic principles in that regard. And after proper investigations, if we find out that there are wrongdoings, we are reinstating the people.

SIEGEL: Let me ask you about something else that happened here. When President Erdogan came to Washington, people saw in videos that were taken that day the president of Turkey giving a signal to his security guards to go beat up people who were protesting, using their rights on American soil to do so.

KILIC: So upon the sequence of events, you are reaching for a conclusion. But you are objecting me doing the same thing with Fethullah depending on the different context.

SIEGEL: You're not reaching conclusions.

SIEGEL: You haven't reached conclusions about...

KILIC: I'm leaving it to the U.S. legal authorities. We are just providing evidence in that regard. And I propose the U.S. authorities to take a closer look and in that analysis of the information that we have provided.

SIEGEL: Are you satisfied with the cooperation you're getting from the U.S. Department of Justice on the application to have Gulen extradited?

KILIC: Frankly speaking, I am not. I would have expected the U.S. authorities in that regard to take action on a faster fashion. Or at least there could be some limitations as far as his activities in the United States is concerned. I mean I read the text of the interview that he has provided to you. He says that his last wish will be spitting in the face of the Turkish president.

SIEGEL: Ambassador Kilic, thank you very much for so much of your time.

KILIC: Thank you so much for hearing me. Thank you.