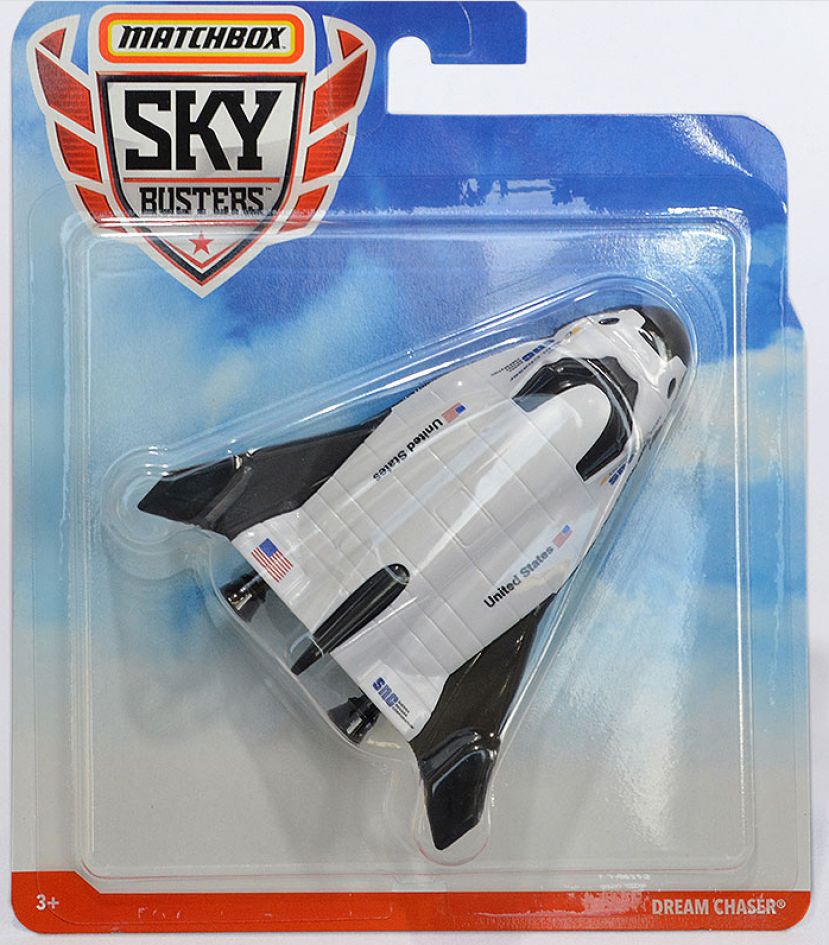 The Matchbox Dream Chaser is modeled after the space plane's crewed configuration, which competed for, but was not selected by NASA's commercial crew program to fly astronauts to and from the International Space Station. A cargo version of the vehicle, which lacks forward windows and sports a mostly black upper body, is currently under development to resupply the space station under a NASA contract beginning in 2020.

Both versions of the Dream Chaser were based on the design of NASA's HL-20 "horizontal lander" lifting body, which itself was reverse engineered from Russia's BOR-4 unpiloted orbital rocket plane of the 1980s. The Dream Chaser has wings, but derives 70 percent of its lift from the shape of its body. It is designed to launch atop a rocket (initially, the United Launch Alliance Atlas V), dock with the space station in orbit and then return to Earth as a glider, much like NASA's retired space shuttle orbiters.

A full-size test article of the crew-configured Dream Chaser successfully flew an approach and landing test in November 2017, dropping from a carrier helicopter at 12,324 feet (3,760 meters) to an autonomous touchdown at Edwards Air Force Base in California. The vehicle was in free flight for 60 seconds and accelerated to 330 mph (531 kp/h) before touching down at 191 mph (307 kp/h) and rolling out about 4,200 feet (1,280 m).

The same craft flew a similar drop test in 2013, but after touching down suffered a gear failure and skidded off the runway.

The Dream Chaser's winged design and aircraft-like landing make it the only craft of its kind in the commercial space industry today.

The Dream Chaser is the second space-inspired toy from Mattel's Matchbox lines to be released this year. In August, NASA's Space Exploration Vehicle (SEV) concept rover with its multi-wheel chassis called "Chariot" debuted for sale as a Matchbox toy car.

Sky Busters has previously only produced one other spacecraft, the shuttle orbiter.

According to SNC, the Matchbox Sky Busters Dream Chaser will be available at retailers including Dollar General and JCPenney, in addition to stores supplied by Darice Global Sourcing.

"We are thrilled that Dream Chaser will be inspiring kids everywhere and up close," said Eren Ozmen, SNC owner, chairwoman and president. "A big part of SNC's mission is to inspire the next generation of space explorers and innovators.Â  This toy will spark kids' imaginations, help them dream big and excite them about the possibilities in space."