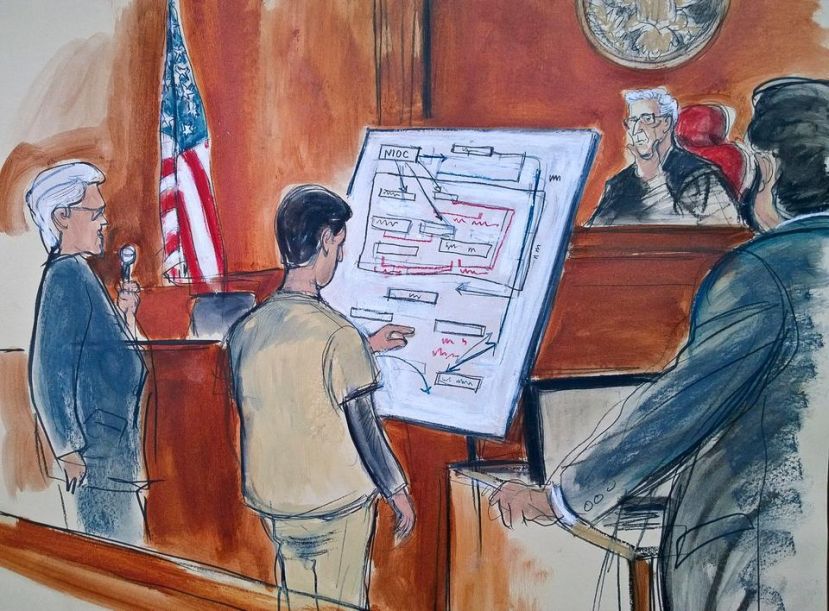 On the second day of the hearing, the court continued to listen to the witnesses, including Zarrab, who said he did not "tell the truth completely and transparently" to the FBI as he "did not know" what he would come across and "felt scared" when he was detained in Miami last year.

Zarrab accepted all charges he is accused of and said in federal court that he helped Iran use funds deposited in Turkey's Halkbank to buy gold, which was transferred to Dubai and sold for cash. He also agreed to cooperate with the US prosecutors because he said it was "the best way to be released from jail."

Zarrab in the court drew a multicoloured diagram to illustrate the complex series of transactions he said he used to avoid scrutiny of US banks and regulators. He explained how he falsified customs documents to make it appear that gold was bound for Iran, rather than Dubai.

Other people on the witness list including alleged members of Fetullah Terrorist Organisation (FETO), Osman Zeki Canitez and Aykan Erdemir, appeared in the court. Erdemir is also a former deputy of the main opposition Republican People's Party (CHP).

The Istanbul chief prosecutor's office on Tuesday issued arrest warrants for the two, and charged them with "stealing documents related to national security".

US attorney defends his evidence

At Tuesday's hearing, the prosecutor’s office directed all charges Zarrab is accused of to Atilla.

The office defended voice recordings it had submitted to the court as evidence and did not disclose their source.

David Denton, the deputy prosecuting attorney, said the people who made the recordings did their job. He also said they would testify as witnesses.

Victor Rocco, Atilla’s lawyer, rejected the charges his client is accused of, saying “Atilla was one of the victims of Zarrab.”

He further mentioned that Atilla had travelled to the US twice after Zarrab was detained, Rocco also criticised the voice recordings on the grounds that they were obtained illegally.

Turkey recently launched a probe against US prosecutors connected to the Zarrab case.

Istanbul prosecutors accused former US attorney for the southern district of New York, Preet Bharara, and his replacement Joon H. Kim of using information and documents from an old Turkish investigation in their case.

Bharara, who launched the probe into Zarrab, was fired on March 11 as part of a mass Trump administration housecleaning of US attorneys who served under President Barack Obama.

Turkish authorities have called on the US administration to drop the case involving Zarrab saying it "lacks legal grounds." Turkey says that it is not subject to US-based sanctıons as they are not upheld or recognised by the UN.
Source: AA

More in this category: « Zarrab Says He Paid $45,000 Bribe to US Prison Guard Zarrab Spoke of the Need 'To Lie to Get Out of Prison' - Defence Lawyers »