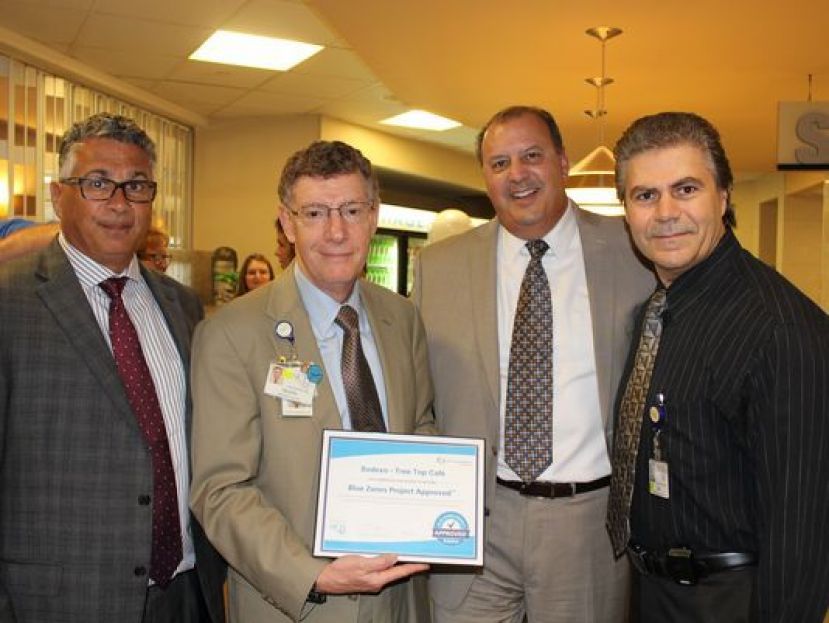 Don’t go searching for a sugar buzz from a soft drink in the cafeterias at some local hospitals. Sugar-sweetened beverages are not for sale in the NCH Healthcare System cafeterias, one of several changes that Sodexo USA, the management company, took so the company could become Blue Zones-certified. Sodexo has gained approval as a Blue Zones Project restaurant through the Treetops Café at NCH Baker Hospital Downtown and the Wave Café at North Naples Hospital. Both cafes are open to the public.

To become Blue Zones-recognized, Sodexo began offering menu options that adhere to the health and longevity initiative underway in the community

The Blue Zones initiative, introduced to the community by NCH in 2015, involves helping businesses, government agencies, restaurants, grocery stores, churches, residential communities and other groups incorporate healthier options in daily practices so their audience base can make better choices. The project is voluntary.

The philosophy is that over time, healthier choices will become the easier choice, and each incremental step can improve health and well-being. An example is offering fresh fruit and bottled water instead of just soft drinks and candy bars in employee break rooms.

Southwest Florida is one of 42 communities in nine states that are either working toward recognition as a Blue Zones community or have achieved it by widespread adoption of the underlying principles.

The project is based on the world travels of Dan Buettner, a National Geographics explorer who identified communities worldwide where people share lifestyle traits and live to 100 or older. He wrote a New York Times best-seller about the nine principles of longevity.

The “Power Nine” include moving naturally by being physically active, eating a plant-slant diet, knowing your purpose in life, taking time to relax, having a healthy social network and putting loved ones first.  A popular activity is to form walking groups, or walking moais, to use Blue Zones terminology. In the cafeterias, Sodexo began offering dishes that are aligned with Blue Zones recommendations, such as serving whole-grain and whole-wheat breads, black bean burgers, vegetarian burgers, spring rolls and vegetarian rolls. There also are lighter portions, along with lemon and lime to add flavoring to water. Salt shakers are no longer sitting on the dining room tables.

“We are proud to be involved in the Blue Zones Project,” Bob Bucciarelli, regional vice president of Sodexo Healthcare North America, said in a news release. “Our dedication to improve quality of life is backed by initiatives like Sodexo’s ‘mindful,’ which promotes balanced nutrition for healthy eating. Blue Zones Project aligns with our vision of enhancing quality of life by making healthy choices easier.”

After removing sugar-sweetened beverages from the hospital cafes, Sodexo estimates 500 pounds of sugar is not being consumed every month. In addition, the company is seeing a 74 percent increase in the sale of vegetables and a 25 percent drop in the sale of fried food.

So far, 75 other companies in Collier County and south Lee County have become Blue Zones-recognized, which involves an application process and adopting health-focused practices so employees or members can make changes in their daily lives to get healthier. Factoring in the other 41 communities that are taking part in Blue Zones Project campaigns, more than 3 million lives are being impacted with healthier options.

The Blue Zones Project is operated by Sharecare, an Atlanta-based company that offers an online platform for consumers to improve their health and wellness. The company was founded in 2010 by talk show host Dr. Mehmet Oz and the company’s chief executive officer, Jeff Arnold.

More in this category: « TSA Will Mandate Air Cargo from Turkey Must Be Screened THY, Istanbul Atatürk Airport Outperform European Competitors »