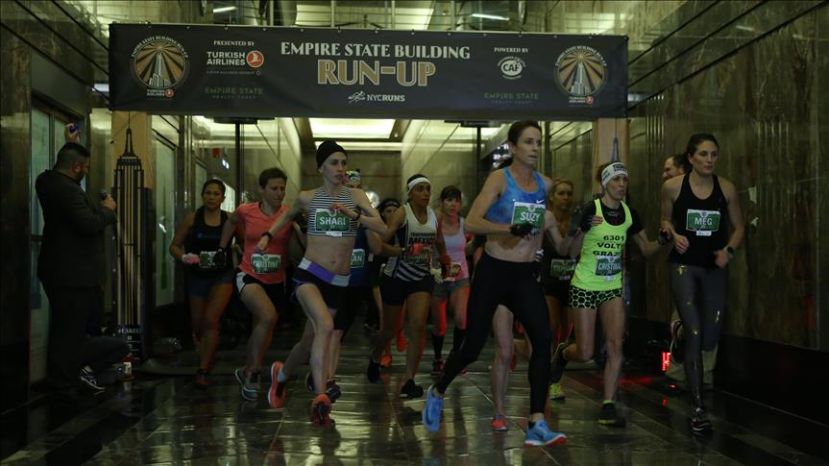 Approximately 250 runners from around the world climbed the Empire State Building Run-Up presented by Turkish Airlines and powered by the Challenged Athletes Foundation. In the world’s first and most famous tower race, runners climbed 1,576 stairs, 1,050 vertical feet (320 meters), to the 86th floor of the fifth tallest building in the U.S. for the 41st annual event on Wednesday. Frank Nicolas Carreno Hernandez from Colombia won the men’s invitational with 10 minutes and 50 seconds in his first participation in the Run-Up, The defending champion Suzy Walsham from Singapore won the women’s invitational with 12 minutes and 56 seconds. This was Walsham’s ninth total victory in the race, and her sixth consecutive win.

“This was a little harder than the last couple of years,” Walsham told Anadolu Agency, noting that she was sick for two months and was not able to train for seven weeks.

She said she will be participating next year as well, aiming for another title. “I would love to go for 10. That’s my goal, to just come back and try to get 10.”

Australian athlete Paul Crake set the record in the men’s category at nine minutes and 33 seconds in 2003, while it took Andrea Mayr of Austria just 11 minutes and 23 seconds to set the women’s mark in 2006.

The Empire State Building was lit up at night with red and white — the colors of the Turkish national flag and its flagship airlines carrier.

Turkish Airlines has its New York office on the 75th floor in the Empire State Building, and headquarters in Istanbul.

“As the airline that flies to more destinations than any other, we not only pride ourselves on the world-class experiences we offer, but in our ability to build bridges between people and cultures,” he said.

“This event raises important awareness for the Challenged Athletes Foundation’s important work in providing access to a healthy and active lifestyle for all – and it is an honor to support them,” he said.

“We are thrilled to see people, from all walks of life, connecting through a common passion for sport, competition, and a common commitment to improving the lives of others,” he added.

The President and Chief Operating Officer of the Empire State Realty Trust John Kessler told the Anadolu Agency that they were pleased to have the Turkish Airlines as a sponsor, which helped them to promote the event.

“When I think about people who have disabilities and how they overcome them, it makes them more powerful in so many other ways,” Dr. Mehmet Oz said in the post-race ceremony.

The Turkish-American cardiothoracic surgeon, whose television program the “Dr. Oz Show” has won several Daytime Emmy Awards, said “At the base of principal, as a doctor I will say this, there is a majesty in the human body, how unique it is. It’s not always perfect, but we make it work beautifully.”

Dr. Oz said he did not know much about the Empire State Building Run-Up, but when he looked it up he was really impressed. “The organizations that are responsible to bring this into fruition deserve a credit,” he added.

The Run-Up was a first for Rudy Garcia-Tolson, a two-time paralympic gold medalist. With a time of 29 minutes and 5 seconds, he became the first double above-knee amputee to complete the race.

“The race was pretty hard actually, but I was very happy to achieve my goal of completing it under 30 minutes. Overall, it was an awesome experience,” he told Anadolu Agency.

“I got into a good rhythm and before I knew it I was able to reach the 80th floor, and had six more floors to go,” he added.

Garcia-Tolson, who won gold in the 200 meters individual medley swimming in both Athens 2004 and Beijing 2008 Summer Paralympics, said he wants to go to the 2020 Paralympic Games in Tokyo to represent Team USA, which will be his fifth in the games.

He also completed the Ford Ironman Arizona in 2009 to become the first double above-knee amputee to finish an Ironman triathlon.

“My goal is to go to Kona Ironman in Hawaii and finish that, which was my first attempt in Ironman but did not finish it,” he said.

Garcia-Tolson said he wants to come back and compete in the Empire State Building Run-Up next year as well.

“Next year, I want to do it again, faster, to break my record with a little bit more training and make sure I am more prepared,” he added. Ovunc Kutlu - brinkwire.com

More in this category: « The Chobani Way: Insights to Build Culture and Community Chobani Greek Yogurt Mogul, Ex-Wife Face Off in Court Battle »