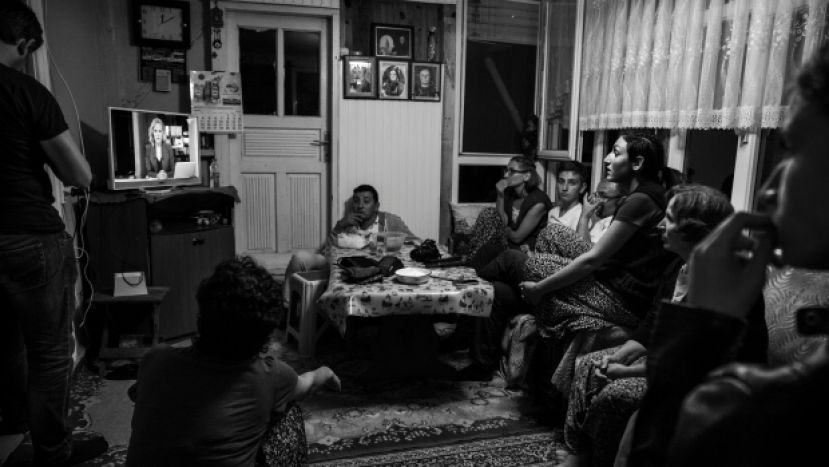 A family in Turkey watches the attempted military coup unfold on the state television network TRT on July 15, 2016. (Mustafa Can Koca)

Sevkatlioglu, 41, has only just returned home after 11 months in hospital. On that Friday night last summer, she bolted out of bed in tears when she heard what was happening.

Soon she was making her way to Istanbul's Ataturk airport on foot with her husband, Mehmet Sefik Sevkatlioglu, hoping to help stop the coup. A neighbour would later tell her that when her husband was asked why he was running, he answered: "I'm going to be a martyr."

A tank mowed the couple down. His wife survived.

"I felt my legs dangling, but I didn't feel pain," Vahide Sevkatlioglu said from her apartment in Istanbul ahead of a nearly week-long commemoration of the coup anniversary.

Her left leg was amputated above the knee, her right is held together by metal rods and skin grafts. Her three children have lost their father.

Her faith leaves no room for regret.

"The first thing that came to my mind was Syria," Sevkatlioglu said, to explain why she felt she needed to protect her country. "We know what happened there."

Today, she says she is content. "My loss is big, but [it's] because we live with honour and because God allowed this for us."
Turkey Coup

Ilhami Cil is still recovering from a gunshot wound in his leg. He is on the board of the July 15 Veterans Association, which provides psychological support services to veterans and their families. (Turgut Yeter/CBC News)

"Don't do this!," Ilhami Cil remembers shouting when he saw all the soldiers lined up in front of him in Istanbul. The response, he said, was "guns and bullets." One of those bullets shattered his shin bone.

Cil and millions of others believe outside forces — other countries — are plotting to bring Turkey down. He believes the Turkish government when it says the powerful cleric Fethullah Gulen, who now lives in exile in Pennsylvania and is a former ally of President Recep Tayyip Erdogan, orchestrated the coup attempt.

They also believe the government's response — the arrests, detentions or firings of more than 150,000 people — is necessary to prevent another attack. On Monday alone, another 72 academics were detained. Several people from the human rights organization Amnesty International are also in custody, accused of plotting another coup.

There may be mistakes and those wrongfully accused, Cil insists, but "90 per cent of what's been done is correct."

Cil's wound still hasn't healed, and he is scheduled for a sixth operation. But when asked if Turkey has healed in the last year, he says: "If the opposite had happened [had the coup succeeded], we wouldn't be here. Our country wouldn't be here."

To that Esra Ozakca asks "What if neither had happened?" — neither the coup attempt, nor the state of emergency and presidential decrees that followed.

"Two groups who'd worked together for years had a fight, and now 80 million people are paying the price for it," Ozakca says, referring to the estrangement of Erdogan and Gulen.

Ozakca and her husband, Semih, were dismissed from their jobs as teachers in Mardin, in southeastern Turkey, this year.

"One day, someone fires you, and they say 'bye-bye, everything's done.' You're a social pariah. You can't do anything after that."

Semih Ozakca and academic Nuriye Gulmen are accused of supporting a terror group. They insist they are being targeted solely because they are members of a leftist union and vocal opponents of the Erdogan government.

So they resist. Both have been on a hunger strike for 126 days, in jail for 50. The human rights monument in Ankara, where they used to gather daily, is now barricaded and surrounded by police.

The pair's goal, Esra Ozakca says, is not to starve to death, but to force the government to give them their jobs back. Though martyrdom is not what they covet, they believe they've become important symbols of dissent, with their cause being shared around the world.

Ozakca has taken up her husband's fight and is subsisting on water, rosehip tea and the occasional bit of candy.

She says Gulen supporters "may have actually done this." But, "the second scenario," she says, "is that the government may have needed a revolt like this to stay in power.

Shortly after our interview in Ankara last Thursday, dozens of police positioned in the street where their supporters gather daily broke up a small protest supporting the teachers, dragging some participants away.

Later the same day, Esra Ozakca was also detained by police, then released three days later. As of today, police have placed Ozakca and her supporters under house arrest.

Releasing all of the innocent from custody, she says, would actually help Erdogan.

"He could say these people need to be returned [to their jobs]. It would be a plus for him. It would lengthen the life of his government. It would renew his prestige in the world." - By Nil Köksal, CBC News