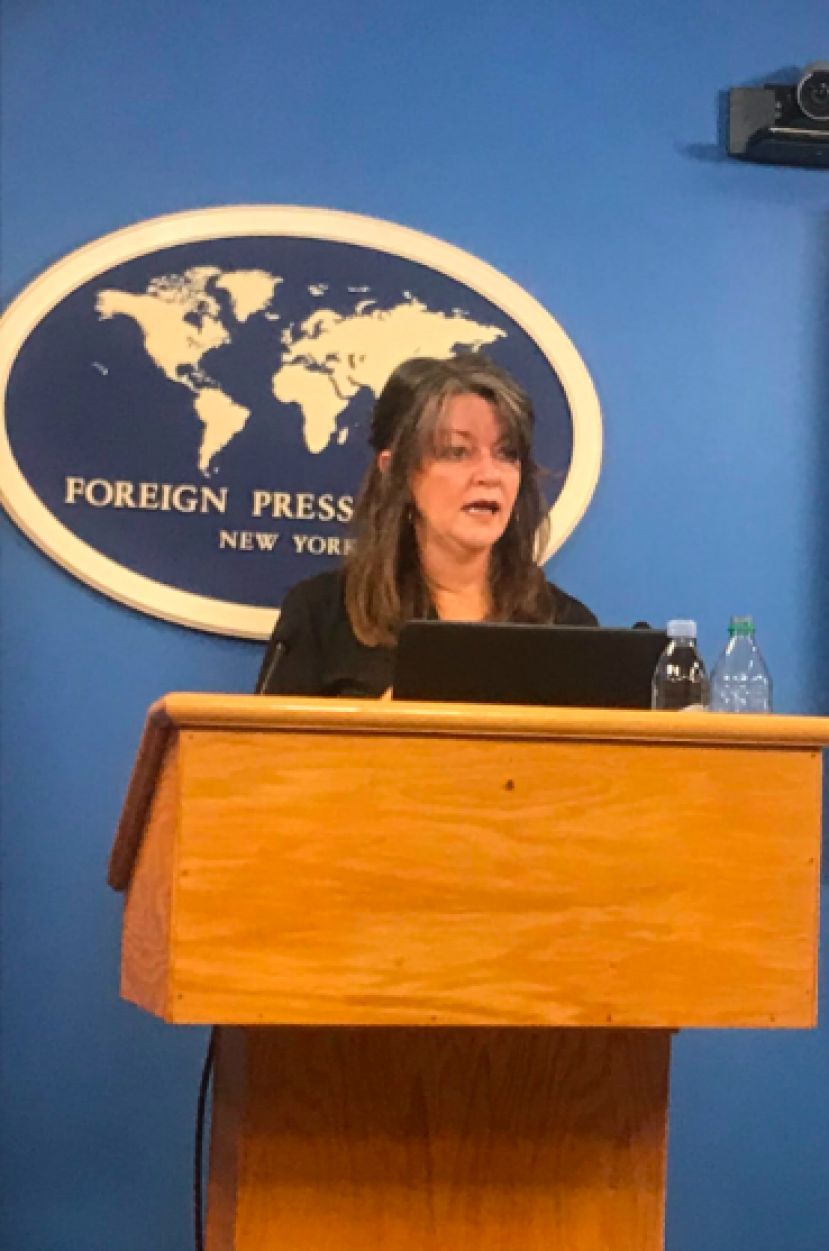 By Ali Cinar - The results of 2016 presidential election came as a surprise to nearly everyone who had been following the national and state election polling, which consistently projected Hillary Clinton as defeating Donald Trump. How could the polls have been so wrong about the state of the election? The fact that so many forecasts were off-target was particularly notable given the increasingly wide variety of methodologies being tested and reported via the mainstream media and other channels. Prof. Monica McDermott from Fordham University had a press briefing at the State Department FPC regarding "Elections 101 - Campaigns and Polling".

"There are misconceptions about polling in America when it comes to elections, and this is something that pollsters fight on a regular basis." said Prof. McDermott. She added that Americans are obsessed with polls since it's an important topic to talk about, because everyone wants to get onboard with polling.

The Public Opinion in an Election is Fluid

Prof. McDermott stated that People's minds change on a regular basis and things happen in campaigns that make people change their minds, that sway people, that firm up their opinions, that de-firm their opinions, and polls are just a snapshot in time.In other words, They are not prediction. Early national polls are not always a good indicator of who will win.

Who is leading in Iowa and New Hampshire is important?

"Iowa and New Hampshire which we tend to focus on as the two earliest states, they are not alone in determining the eventual nominee of either party." Prof McDermott said. They only have so much influence she added.

Vice President Joe Biden is the consistent national poll leader however Pete Buttigieg in the Iowa caucus polls is rising to the top all of a sudden and beating everyone else in the caucus field at this point with an average caucus polling average of 23.5 %. Senator Elizabeth Warren is leading New Hampshire and a consistent leader since October with a polling average 20.7%.

Surprisingly, Pete Buttigieg,is a viable candidate in New Hampshire and Iowa however he is not doing well with the national polls.

The people are focused in Iowa and they are more serious voters than voters nationally at this time in an election.

1990 delegates to win the party's nomination and there are only 65 delegates are available in Iowa and New Hampshire. The question is how Iowa and NH are important?

March 3rd is the key day for Democratic Candidates:

March 3rd the very critical time for Democratic Candidates. There are 1,358 delegates who vote from California and Texas. There are other big states that are part of the Super Tuesday.

Prof. McDermont also made a comparison from previous election. She indicated that Secretary Clinton and Senator Sanders split a lot of the Super Tuesday polls, and so they kept fighting until the very end, but if you can see someone sew it up by Super Tuesday, then they'll be pretty safe and pretty confident going ahead from there.

Twitter company bans all political ads on its platforms, so how do you think how it might influence the political campaign, fundraising campaigns, and the possible outcome of the elections, I mean, in terms how candidates will adjust their strategy due to Twitter policy? Thank you.

A historically large field is seeking the Democratic nomination; the winner will challenge President Donald Trump in the general election on November 3, 2020. Let's see if 2020 Polls

The polling provides an equal voice to everyone and helps to give expression to the public's needs and wants in ways that elections may be too blunt to do. Let's see if the n polling companies who failed to predict in 2016 will do a better job next year.

More in this category: « The Distinguished Friends of Turkey and The Loved Ones Whom We Lost US CONDEMNS IDLIB ATTACKS, STAND BY NATO ALLY TURKEY »