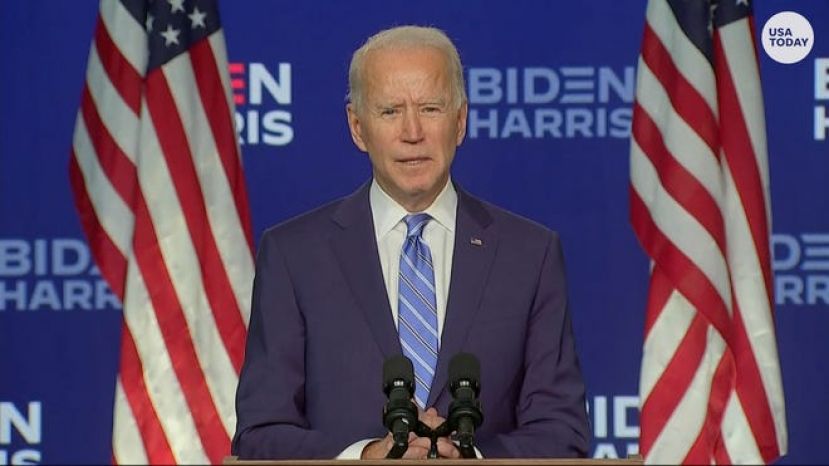 The Democrat Party presidential candidate Joe Biden has voiced his belief that he will win the November 3rd presidential elections. He stated that it could be clearly seen that they had gained a majority in a sufficient number of states to prevail.

In his speech in Delaware, Biden said, "It is clear, after a long night of counting the votes, that we are winning a sufficient number of states to reach 270 electoral committee delegates needed in order to win the presidency. I'm not declaring that I've won, but I do believe that we will be the ones who won once the vote count has been completed."

Biden, who emphasized that it would be the American people who would decide who the next president of the United States would be, underlined the necessity to count every single vote.

He said that when the election process was completed, it would be time to leave the harsh rhetoric of the campaign behind, reduce the tension, and for "everyone to listen to each other." He said, "We are not enemies."

Biden, who emphasized that he would carry out his duties as the president of the U.S. if he officially won the elections, despite carrying out his campaign as a Democrat, said that the presidency was not a partisan institution and that it represented everyone. He said, "I will work in the same way for those who didn't vote for me too."

Biden said, "This will not just be my or our victory; it will be a victory for the American people and for democracy." He gave a message of unity with reference to the colors of both the Republican and the Democrat Party, saying, "Not just the red or blue states; only the United States of America."

Biden said that he was very optimistic about the results from Pennsylvania, one of the states where it is too close to call. He believed that the vast majority of the mail-in ballots used here had been cast for him.

With reference to the statement "We the people" of the American Constitution, Biden said, "The American people will not be bullied in any way, they cannot be silenced, and they cannot be forced into submitting to defeat."

The states had widened the scope of mail-in ballots, and early voting preferences for voters who did not want to wait in long queues at the ballot boxes due to the coronavirus pandemic in the U.S. Over 100 million votes had already been cast prior to the day of the election as a result. However, with mail-in ballots reaching record levels this year, it was forecasted that the election results would be delayed. Under these circumstances, the Democrats were saying that the Republican candidate Donald Trump would question the reliability of the elections and voicing concerns that he could take them to the Supreme Court.

More in this category: « GameChanger Author Gunasti: "Trump will win the Presidential Election." Biden's First Message: "I pledged to be a President who will not seek to divide, but unify!" »