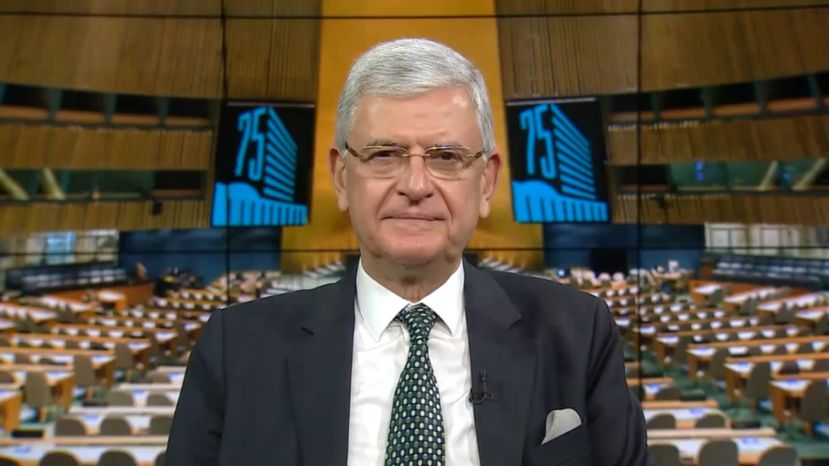 Volkan Bozkır, President of the 75th United Nations General Assembly, whose term of office ends next week, evaluated his one-year term at the press conference. Bozkır said that he carried out his presidency in the most challenging period caused by the pandemic.

He will hand over his duty to Maldives Minister of Foreign Affairs Abdulla Shahid, elected as the president of the 76th UN General Assembly on September 14; Bozkır also stated that despite all the challenges and the negatives, the General Assembly fulfilled its duties during his term.

"The UN is the only global power standing during the pandemic."

Stating that he continued his duty in the deserted corridors of the UN due to the pandemic and that the meetings were held in a virtual environment for a long time, Bozkır said, "Frankly, I did not like these virtual meetings. It was quite different from the one-on-one and face-to-face meetings we are used to, but it was necessary due to the conditions of the period we went through." Bozkır noted that the UN is the only international organization that could survive despite all the adverse conditions.

"People trust the UN, but they must see reciprocity."

Bozkır stated that when he was in charge and went to the Middle East to see the situation of the refugees on the site and also to the Caribbean due to the hurricane, in all the countries he visited, people applauded when they saw the UN flag. "I respect all the flags of all countries, but the most respected flag in today's world is the UN flag. I have personally seen this on the official visits I have done. People like the UN. The UN has to do so much more for these people."

Stating that the UN should realize the affection and trust of people, Bozkır criticized the global organization for not standing by people enough when necessary. Bozkır said, "The UN steps in after the crises are faced, not before. The UN has the capacity to intervene before crises arise in the world. It needs to demonstrate this capacity. The UN must prevent these crises instead of sending the Peacekeeping Forces."

Answering the question of a journalist regarding what he will do after this, Bozkır stated, "I am still a member of the Turkish parliament. I am appointed to this duty temporarily for a year."

"The UN does not pay a salary to the presidents of the General Assembly."

Bozkır also mentioned the challenges faced by the people elected to the presidency of the UN General Assembly once they arrive in New York City, saying, "You are not getting paid because you are the president of the UN General Assembly. Your rent is not covered. I think the UN should pay a salary. The first problem you face when you are appointed to this position is that you do not have health insurance in your new country of residence. If the people appointed to the position come from a small country, they face challenges because they cannot receive a salary from the UN. Some of the presidents of the General Assembly who find themselves in this situation have to resort to other remedies. I trusted my own country for this duty. I was sure that Turkey would support me both on financial issues and since I did not have health insurance."

Which leaders will come to New York for the 76th UN General Assembly?

It is not yet clear how many world leaders will physically be there and which countries will attend the high-level meetings that took place on a completely virtual basis last year due to the pandemic.

The US called for the country leaders who will attend the high-level meetings of the General Assembly to be held this year to either attend via video conference or to keep the number of delegations at a minimum if they plan to attend physically. It was announced that President Recep Tayyip Erdogan would be in New York between September 19 to September 22 in order to attend the 76th UN Security Council.

Bozkır responded to a question regarding this attendance as such: "We wish for an utmost level of attendance of leaders to the General Assembly. The UN General Assembly is the most democratic platform in the world where leaders can express themselves, but there is also the issue of the host country. The US holds the opinion that attendance should be through video conferences. We cannot tell them to come and attend physically in this case. As of now, 83 presidents and 55 prime ministers are planning to come to New York. Twenty-six leaders will join via video call. Twenty-three countries are expected to be represented by their minister of foreign affairs."

More in this category: « TURKOFAMERICA Is at White House Now Spokesperson Ned Price:“The long-standing position of the U.S. remains the same »