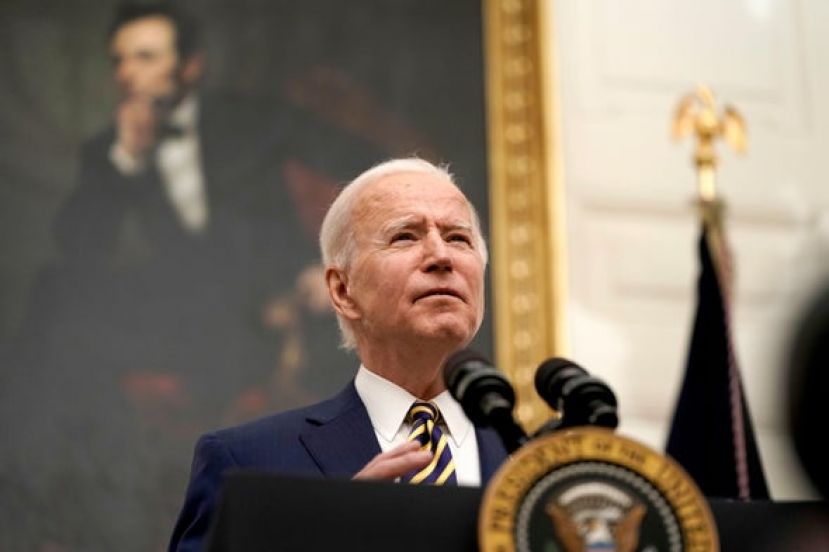 Putting democracy, diplomacy, multilateralism, and restoration of alliances at the center of the foreign policy plan with President Biden, the U.S. is trying to correct the erosion of America's image on international platforms in order to resolve the concerns caused by Trump's "America First" doctrine among its allies and to strengthen the alliances. Emphasizing the phrase "America is back," especially in events closely followed by the international community, such as America's reintegration into the Paris Agreement, which was one of his first actions, President Biden has shown that America will lead global issues that require international responsibility and return to the global leadership race.

During his speech at a university in New York in 2019, Biden said, "To me, foreign policy is domestic policy, and domestic policy is foreign policy. They are deeply connected." He added that U.S. security depends directly on "having the strongest network of partners and alliances working alongside one another." Especially since almost all of the National Security and Foreign Policy team was formed during President Obama's term, President Biden knows very well the mistakes made in the past. Likewise, he is also aware that with the COVID-19 outbreak, different dynamics are now emerging in many regions, including the Middle East. In this regard, while talking about American foreign policy's priorities, Secretary of State Antony Blinken's most recent statement, "We are against military coups, we will promote democracy globally," is a very remarkable one. This is particularly important because, in many countries, including Turkey, the perception that the U.S. would overthrow the government using different methods has taken root. Secretary Blinken also underlined that building lasting peace, even in Afghanistan and the Middle East, is now more important than military power.

For the first time since he took office, Biden had the opportunity to express his expectations of Europe and his views on the agenda he wants to create to strengthen transatlantic relations at the Munich Security Conference with the virtual participation of leaders such as the German Chancellor Merkel, French President Macron, British Prime Minister Boris Johnson, the NATO Secretary-General, the President of the European Commission, the Secretary-General of the United Nations, and the President of the Council of Europe. Expressing America's determination to act together with NATO and its allies against global threats, Biden expressed his satisfaction with the investments made in Europe for developing military capacity and sharing the burden in the field of defense.

One of the important headlines at the summit, which was also included in Biden's agenda, was on China. Many actors in the global system have recently considered the relationship between NATO and Europe. Addressing the long-term strategic competition with China, Biden pointed out the struggle between democracies and autocracies in China and Russia, based on the approach that democracy is an important component of foreign policy. The Chinese issue is increasingly coming to the fore as a matter prioritized by the Biden administration in terms of national security. The fact that the largest team in the White House Security Council is the Indo-Pacific team shows that China is considered a threat, and the region is growing in importance for the United States. In this context, it seems that China is the priority for U.S. foreign policy.

Because Blinken had described China's relations with the U.S. as "The biggest geopolitical test of the 21st century" as well, the fact that the Secretary of Defense Lloyd Austin and the Secretary of State Antony Blinken's first international trip will be to Japan and South Korea shows how much importance they attach to Asia-Pacific. This first trip, which is expected to be a threat, can also be perceived as the message "We won't let them run riot."

Returning to the Munich Security Conference, the general picture that emerged was that the main actors in the international system expressed their expectations from each other now that America was back and tried to determine to what degree their expectations fell in line with each other. We see that Biden has been trying to show that he wants to build on democracy and unification of foreign policy, as he did to domestic policy. Particularly, Biden's call for the Western alliance to act jointly against existing threats and to unite on the basis of common values and democracy can be considered a cross-reference to the disagreements with the Western ally.

It is expected that Biden will make the same statements on every platform where he finds an opportunity to resolve the disagreements with Macron and Merkel and to persuade European leaders to find joint solutions regarding how to compete with China, restructuring and strengthening NATO. Europe's attitude at this point will also be decisive for the future of transatlantic relations. Likewise, an agenda with broader topics such as "strategic autonomy," an independent Europe, a Europe that does not want to be caught in the U.S.–China trade wars awaits us.

Within the scope of the NATO 2030 plan, America's willingness to work in harmony with Europe on the subjects of restructuring and strengthening the alliance, social health policies in the fight against the pandemic, destructive technological developments, China's rise, Russia's threat, climate change, global terrorism, supporting democracies, reshaping global supply chains and especially the approaches of Germany and France, who are among the important actors of the European Union, on these issues, will also be decisive in terms of how these affairs will develop.

We are in a multipolar international system where the balance of power and alliances change in the face of shifting common interests and threats, technology production plays a critical role in shaping states' national security policies, and where we experience a different dimension of globalization. As emphasized at the Munich Security Conference, with COVID-19 in this new era, in which security will be defined in a much broader sense and will shift from a narrow military-focused approach to a much broader approach; social health, food security, and the climate crisis have become issues related to national security, and the importance of global alliances, transatlantic relations, and international solidarity has been increasing. It is becoming increasingly important that all actors agree on the vision that global issues such as the pandemic, the climate crisis, nuclear disarmament, and the refugee crisis are to be solved not through the singular protectionist and nationalistic policies of the states but through the policies they produce thanks to international cooperation, burden-sharing, and solidarity.

In view of all these internationally changing dynamics, in the Interim National Security Strategy Guidance recently announced by the White House administration, we notice statements that point to the fact that the most powerful U.S. military presence will be in the Pacific region and Europe. This document points that many issues, from China and Russia becoming threats to the U.S. to climate change, rising racism, and technological developments, pose a big problem for the United States. In the document, which points out that the U.S. should shape the future of the international system, the importance of alliances is emphasized notably. President Biden's inclination toward re-entering the Paris Agreement, becoming a member of the World Health Organization again, and sending out the message that "America is back" gives us clues that, after all, he will pursue a foreign policy in cooperation with allies. As expected, in the document, it is emphasized that the U.S. attaches great importance to Israel's security in the Middle East, Iran will be dissuaded from threatening other countries' sovereignty and territorial integrity, and the fight against terrorism will continue. It is also stated that the deficit in the defense budget will be met, and the government will work in coordination with Congress for the army to use technology at the ultimate level.

This era, in which American foreign policy will be shaped together with the allies and transatlantic relations will come to the forefront, also presents opportunities where new partnerships can be forged against new foes in areas where there are existing difficulties and traditional cooperation. These areas include the fight against ISIS in the Middle East, the establishment of peace and stability in Afghanistan within the NATO framework (Blinken's letter to Afghan leaders, where Turkey was asked to be a host is important in terms of our relations), the security of the Black Sea against the Russian threat, and the facilitation of negotiations with Iran. In order to benefit from all these opportunities, mutual trust, understanding, and sincerity have to be re-established on a higher level and between the institutions.

However, President Biden has not yet had a phone call to President Erdogan since he took office. Relevant meetings took place only between Presidential Spokesperson Ibrahim Kalin and National Security Advisor Jake Sullivan and between Secretary of State Antony Blinken and Foreign Minister Mevlut Cavusoglu. Although President Biden started the second round of phone calls with various presidents across the world, the fact that he has not yet called Turkey led to a series of speculations. First, President Biden has concentrated most heavily on domestic policy and the struggle against the pandemic. Turkey, like many countries, is not among Biden's priorities. However, President Biden is a leader who knows Turkey well, with him having visited Turkey four times during his vice presidency. We also know him as a name who has met President Erdogan many times. Currently, the most important problem of Turkish-American relations is the trust issue. The two NATO allies still don't trust each other. Reservations about YPG-PKK, S400/F35, Syria, and human rights in Turkey could be the first agenda items that come to mind. President Biden's remarks against Turkey during his campaign period are the reasons for tension, as well as Turkey's and Russia's intimacy. However, the multi-dimensional nature of Turkish-American relations should not be forgotten. Even though security is the backbone of the relationship of two countries, joint opportunities for innovative collaborations in the field of trade, education, culture, energy, and technology are also on both their agenda.

From the point of view of the U.S., while Congress members have sent three different letters against Turkey to the White House administration, 86 Congress members, who are Turkish friendship group members, also signed those letters. With each passing day, negative Turkish perception increases in Washington D.C., and anti-Turkish groups' common action plays a role in this matter. The action to be taken here is to overcome the problem of trust and to initiate a clear dialog. The closer relations Turkey will establish with Russia and Iran conflict with the interests of the U.S. and other Western countries. Solving problems within the NATO alliance, and Turkey working closely with the U.S. as it did in the past, will be appropriate.  In this context, establishing close relations with the European Union and developing multi-dimensional relations with the Asia-Pacific region, Turkey will continue to be an important ally of the U.S.

Selma Bardakci, Senior Foreign Policy Expert and Atlas Corp. Alumni (State Department is one of the sponsors of Atlas Corp.)

More in this category: « U.S. Policy Toward the South Caucasus under Biden Administration 'Turkey's regional power should be seen' »